Rachel had a friend over to play for a while.  I thought they would probably play outside some, play with dolls, make a mess with craft materials.  I had been feeling a little down so I was looking forward to just enjoying some time to myself while they played.  I made plans to sort through that ever-growing pile of random papers and books that have been neglected in the corner of the school room.  It would be to finally have some time to just get that pile cleared out and I thought that might help to lift my spirits.

After about 10 minutes I was getting settled into my project when the girls came bounding up to me begging for me to walk with them down the street to the playground.  I groaned quietly in my head.  I didn't really want to leave the house.  I didn't feel like being social with other moms at the park.  I was so looking forward to just getting some things done around here.  Walking the whole two blocks to the playground in the heat of the day just sounded like too much for me at that moment.  But these girls had such sweet pleading eyes and I felt guilty for not being more excited about my mantra that kids should spend more time playing and exploring outside.  Of course, I eventually gave in.  I knew they would have more fun at the playground than at the house plus they would get some exercise climbing around the play equipment.  Besides we could all benefit from some fresh air and sunshine.

So I filled a backpack with bottles of water and snacks and we headed to the playground.  I found a bench in the shade and settled down to watch the girls play and just let my mind rest, hoping that maybe just sitting and relaxing outside might cheer me up.  But alas, that wasn't meant to be either.  We didn't stay long at the playground.  Almost immediately upon arriving, Rachel told her friend about the dry creek bed in the woods next to the playground and sure enough they chose to go exploring in nature instead of playing at the playground.  Again, I really didn't want to go.  I had resigned that I would just sit on the bench and not have to do anything.

But I do love the woods and exploring a creek... In the end, the call of nature was too strong and I chose to follow its call.  I'm so glad I did.

The girls quickly got to the bridge and went down to the creek bed to explore. Before they got too involved in exploring I stopped them to have my usual safety in nature talk.  Part of this includes reviewing how to recognize poison ivy.  The most common identifier is leaves of three.  Often the outer two leaves look like they are mittens with a thumb sticking out.  There is often red on the stem.  Poison ivy can be found as a vine, on the ground, or as a bush so you have just keep your eye out for it where ever you go.  It is abundant in the parks in our area. 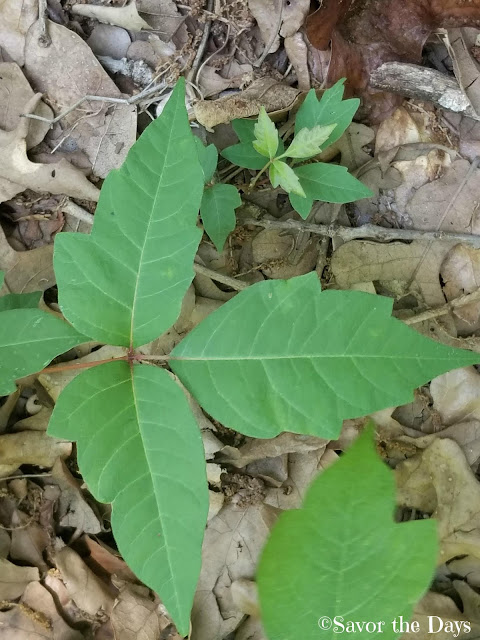 I showed them Virginia Creeper and explained that many people mistake it for poison ivy but it has five leaves and it is perfectly safe to touch. 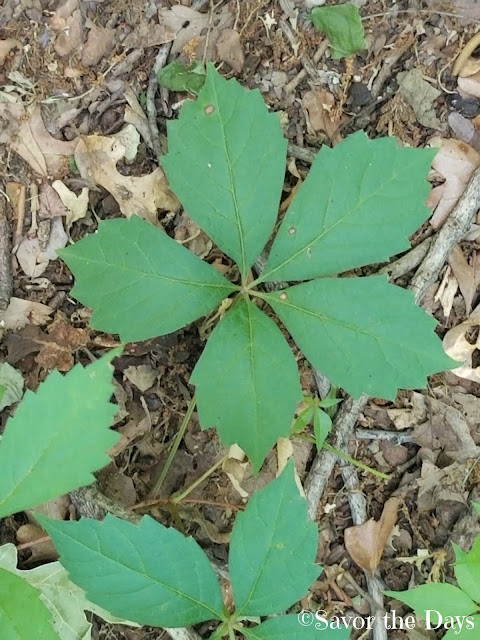 They soon found some little bugs swimming around in the creek. 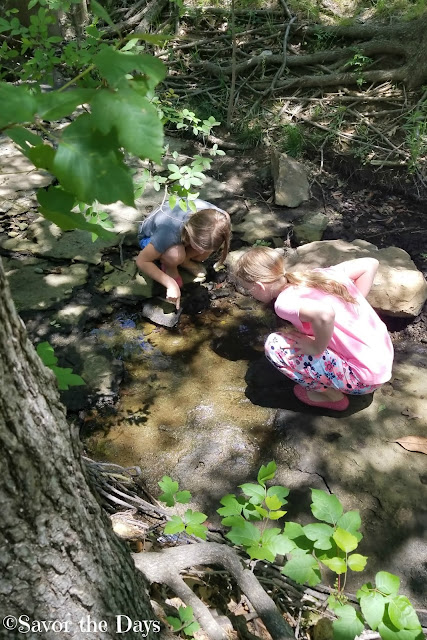 We found these furry little balls hanging from a tree.  I'm not positive but I think these could be young osage oranges.  I will have to go back and look for thorns on the branches to be sure of that though. 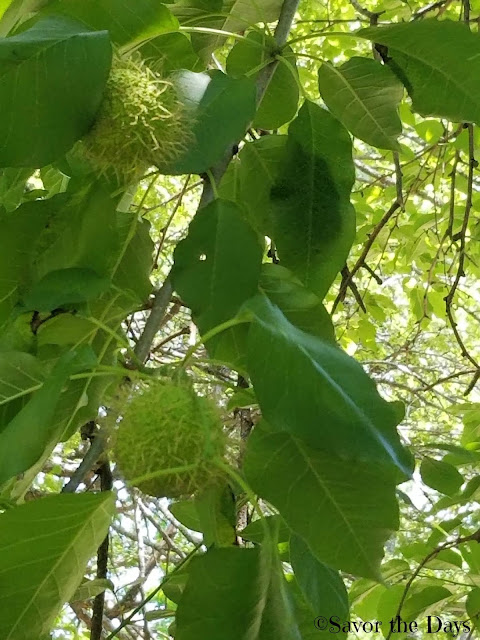 We watched some bees scurrying around on a rock.  I wonder if someone had spilled a soft drink there and the bees were enjoying a new kind of "nectar". 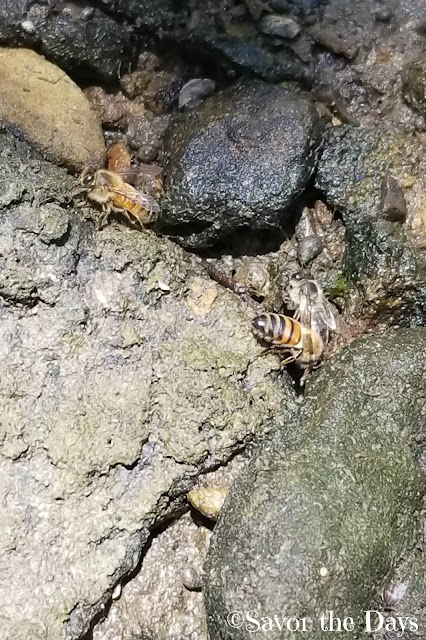 Here is a picture of part of the creek bed.  Rocks, shade, beautiful trees, and birds singing overhead.  I was feeling happy just being out here.  Nature has a way of doing that and there are scientific studies to prove it.  Just being in nature can reduce stress and improve mood for many people.  It is certainly a "happy place" for me. 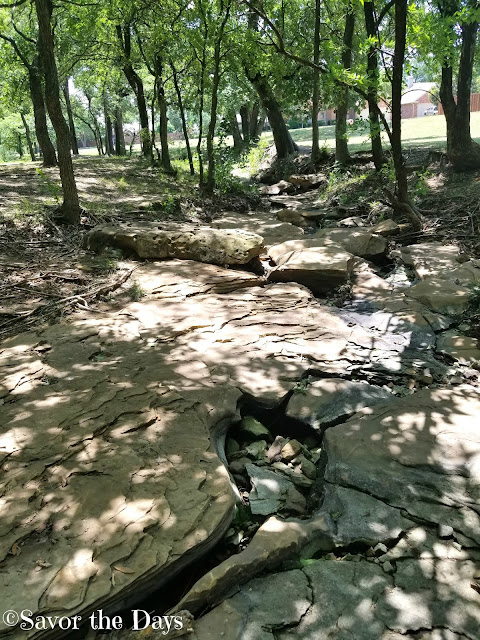 We found several little damselflies.  I think this one might be a familiar bluet damselfly.  It's hard to say for sure without being able to inspect his markings and wings more closely. He didn't seem interested in that and he quickly flew away when I tried to get closer. 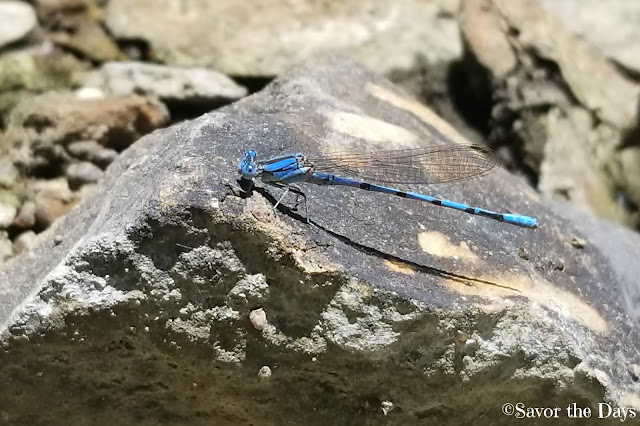 The girls were constantly finding a new area of the creek to check out.  They found frogs here. 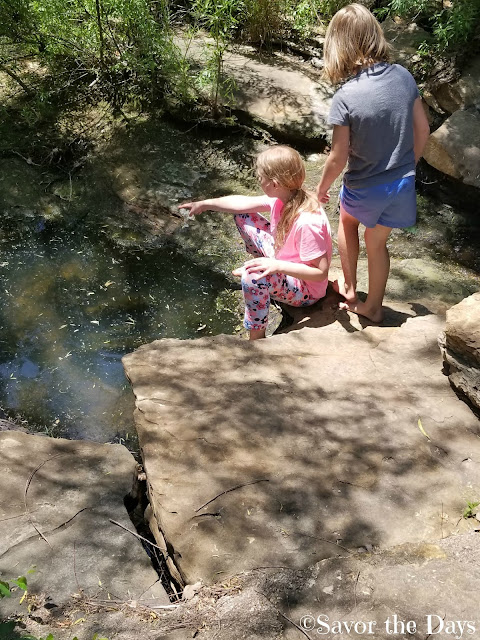 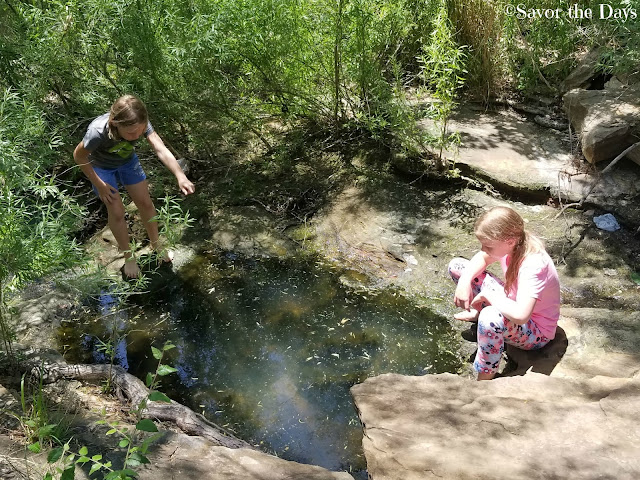 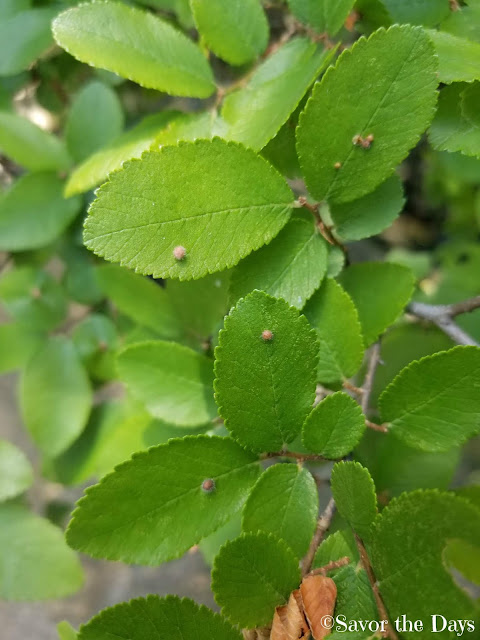 This tree caught our attention. It has these bright seed pods hanging down close to the branches.  I sent a picture of it to a nature group that I'm in and learned that the tree is a green ash.  The girls looked closely at the seed pods and realized that their concave shape would help it float better in the wind which would help spread the seeds farther. 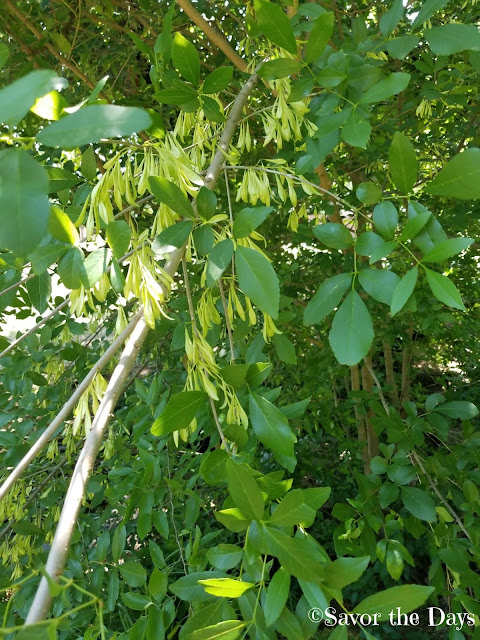 Those sneaky girls were trying to hurry up and hide from me under the bridge.  We were all giggling and being silly. 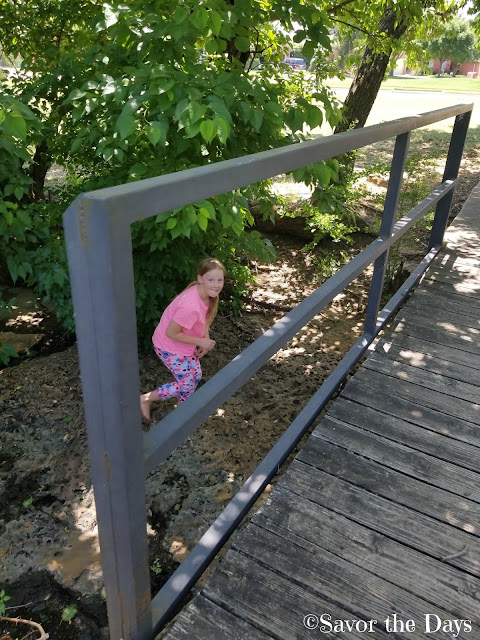 By the time I crossed the bridge they were already on the other side, feet submerged in the creek and big grins on their faces.  I was so happy that they were having fun.  And to be honest, I was having a lot of fun too! 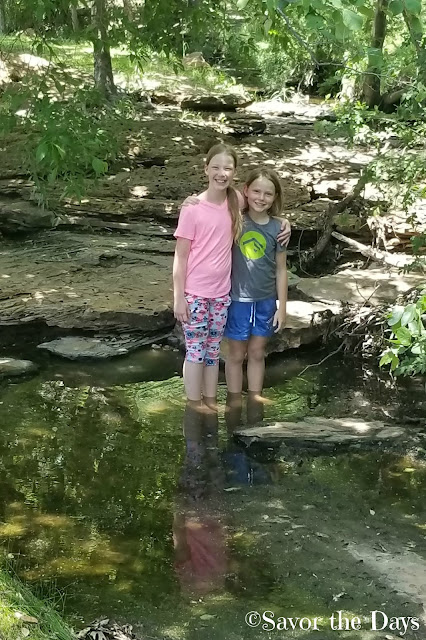 A little more inspection of the water. 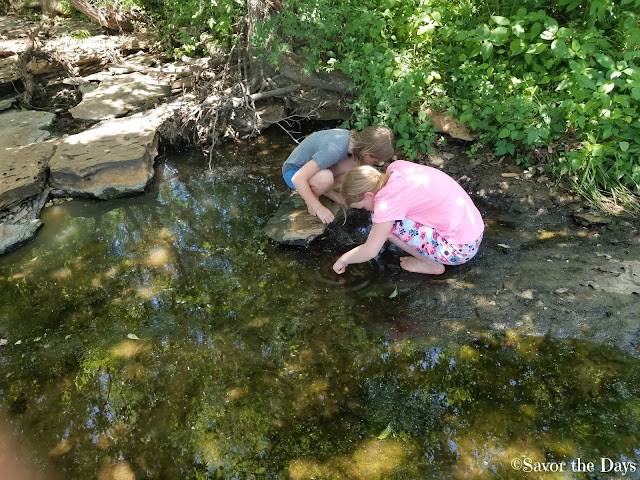 They found a damselfly larva swimming around in there! 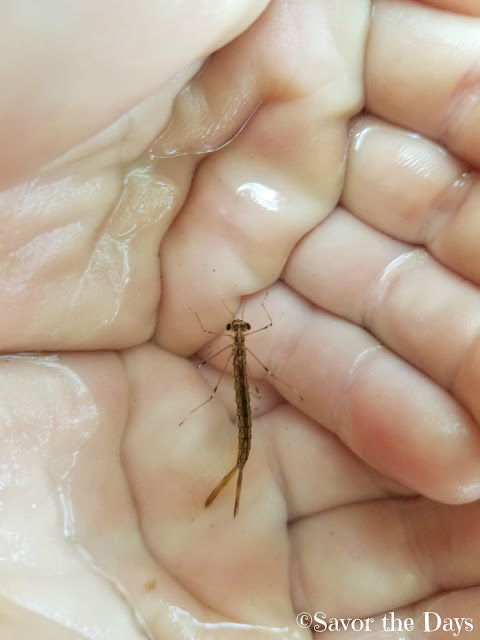 Then they found this other one who is a little younger.  It was swimming around too but the girls put it on a leaf just to contain it while they kept searching for more. 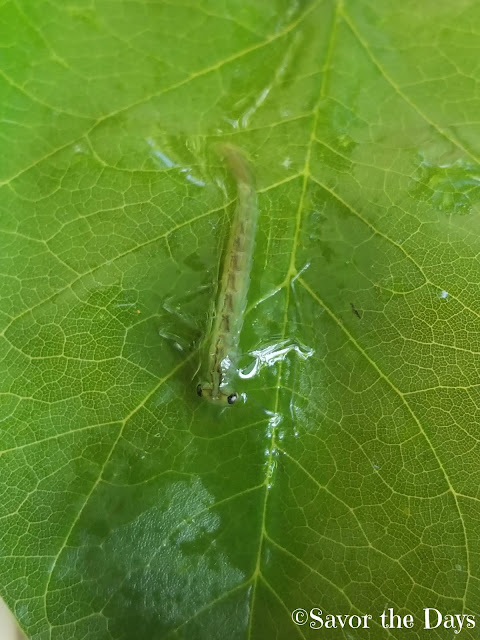 I noticed this piece of possible fossil sticking out from a chipped piece of a rock.  Oh if only I had brought my rock hammer with us.... 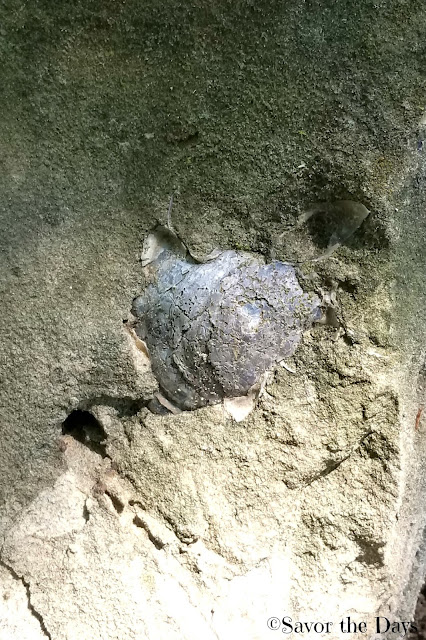 I found this black flying insect munching away on a cedar elm leaf.  I haven't figured out what kind of bug he is but he seems to have a long stinger on him. 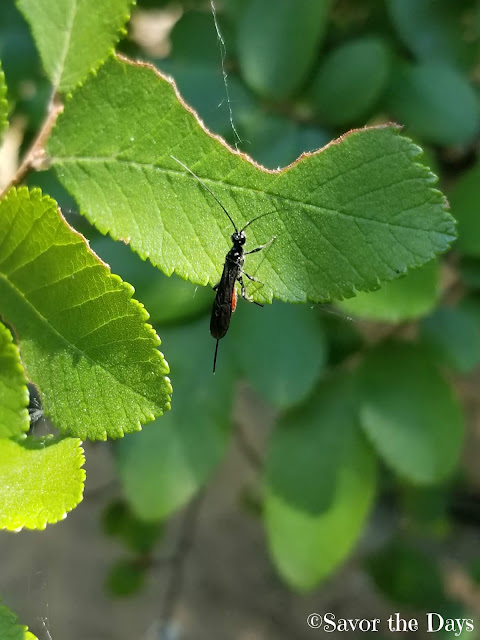 The girls found this interesting thing which looks like seeds.  It looks spiky but it was actually very soft and pliable, not spiky at all.  I don't have a clue as to what type of plant it came from. 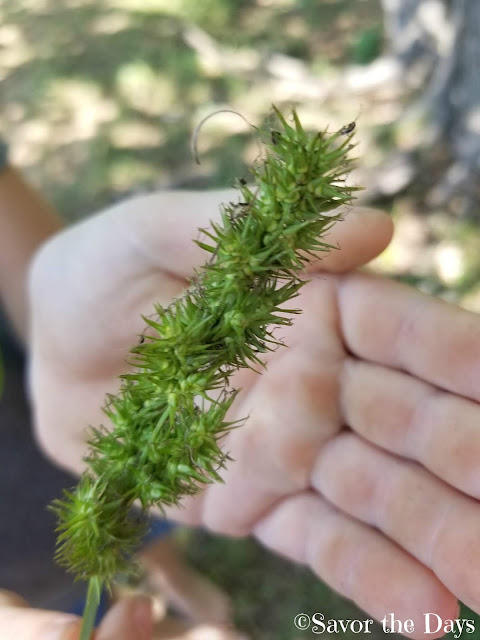 My favorite part of the day was when Rachel cried out, "Lobster!  We found a lobster!"  I smiled and without even seeing it I told her it probably more likely a crawfish.  Yep, they found two crawfish.  They thought they wanted to try to catch them but I had to remind them that crawfish had pinchers and we probably didn't want to try to catch them with our bare hands.  They were ok with that and decided to just watch them walk around under water for a while. 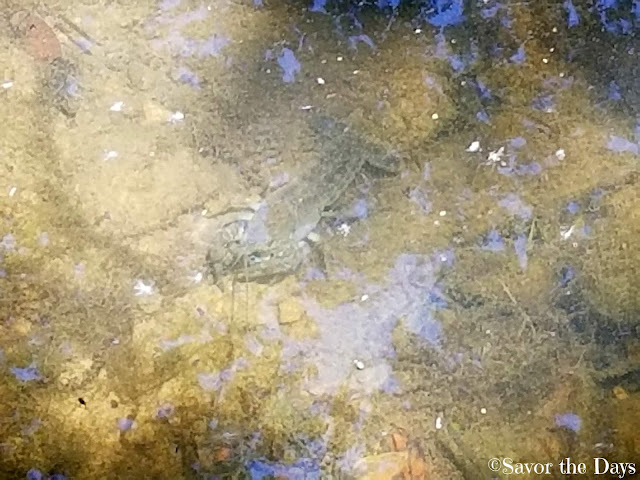 We were only out in the woods for an hour or two but we had a great time!  The girls got exercise, built some confidence through exploring, and learned some new things about trees, plants, and critters.  When we got home, I was surprised to realize just how much that fog had lifted from me and I felt happy again, almost excited about what we had found.  Being out in nature is an amazing experience.  No matter what I might be worrying about or feeling down about, being out among the trees always helps me see things in a better light.  I'm so glad we didn't just stay at the house or play at the playground.  I'm so glad we chose nature to explore nature instead.

Imagine if we all just stepped away from our cell phones and video games and spent even just an hour out in nature once a week.  Do you think we as a society might be a little less stressed, a little more focused, and a lot more happy?

This post is a part of the Homeschool Review Crew's Homeschool Link Up. Want to learn more?  Click on the image below: