Sandy Lake Amusement Park is an old-fashioned park like Fun Fair Park in Baton Rouge where I grew up.  As a matter of fact they have many of the same rides that I grew up on!

I did not ride the Pretzel ride until our first time at Sandy Lake though.  It looked like a fun house to me so I went with Rachel who was then maybe 3 years old.  It was not a fun house.  It was a bumpy ride through a musty old building in the complete darkness.  Not fun for a little 3 year old.  Ever since then, Rachel has given me a hard time about how scary the Pretzel ride was for her.  Mama fail!

But this year she said she wanted to ride it again to conquer her fears.  I was excited that she was challenging herself but I just really didn't like the ride so I was disappointed that I had to ride it again.  But it was the very first thing we did when we got there.

Rachel posed this Before picture of herself as she used to be so scared of the Pretzel ride. 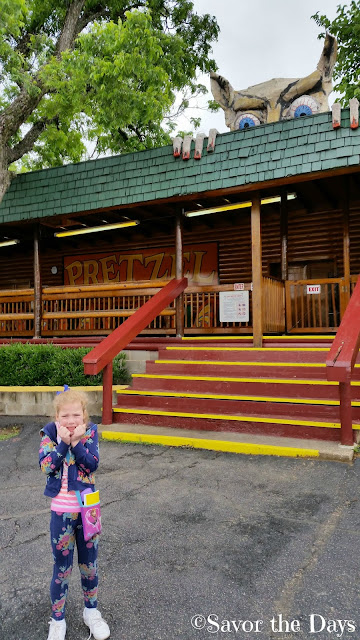 But then she wanted me to take an After picture showing how spunky she was for doing the ride and how it wasn't scary to her at all. 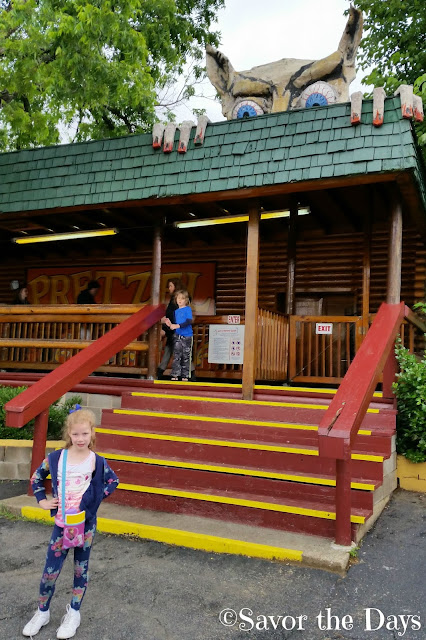 Nicholas was off with friends to ride some of the bigger rides while Rachel and I rode the carousel several times in a row. 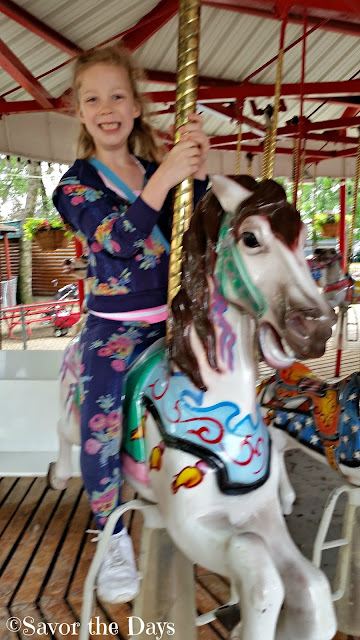 We found Nicholas riding the spinning swings.  I love his smile! 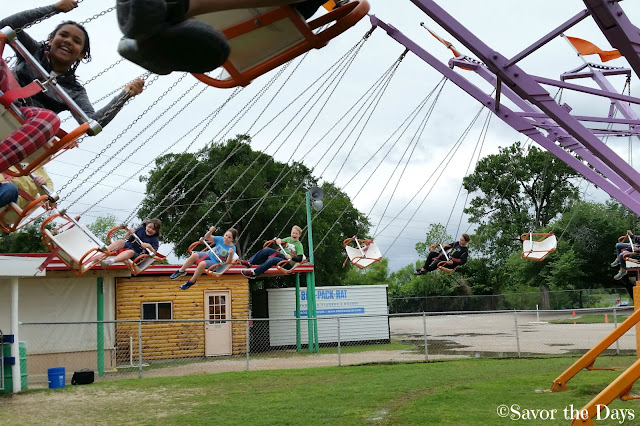 Rachel and I headed back over to find more rides for her.  She hopped into this boat ride and was excited that she had it all to herself.  But another little girl wanted to ride the boats and there were no other seats available so Rachel let her ride along with her.  They talked most of the time with each other except when each of us moms called to them trying to get their picture together. 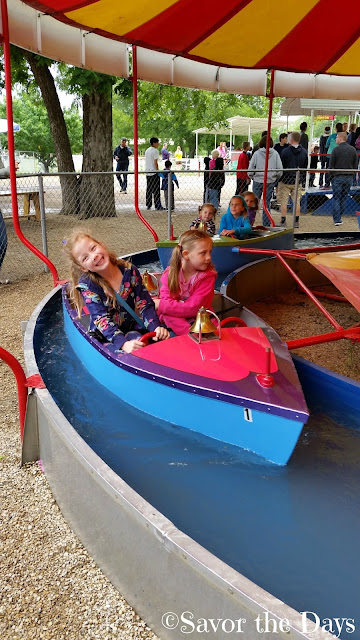 She is a little big for this flying fish ride but she thought they were so cute that she just had to take it for one spin. 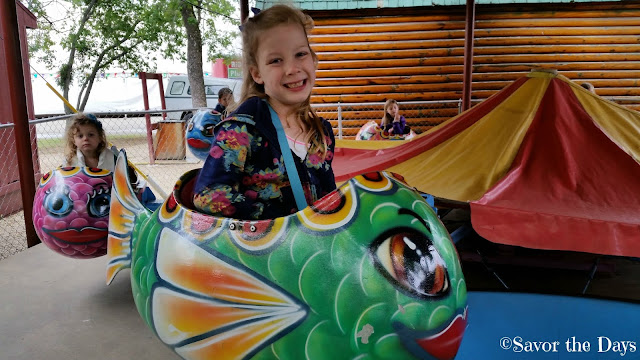 My favorite ride from my childhood - the Paratrooper!  This ride was at Fun Fair Park and I just loved it.  Nicholas rode it several times by himself and I somehow convinced Rachel to ride it with me...I had to because I couldn't ride it myself and leave her standing around on the ground alone.  She rode it with me and did great! 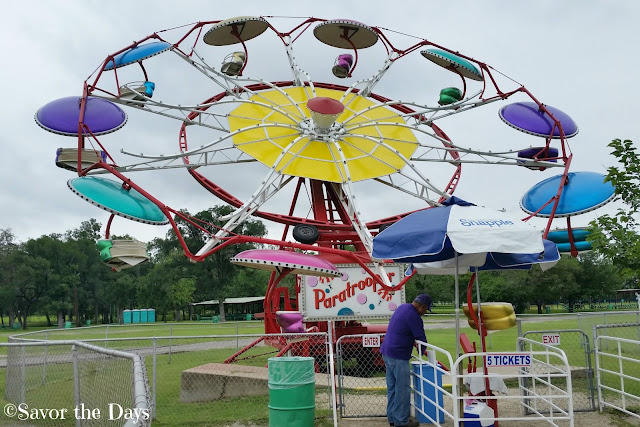 Next we hit the paddle boats.  It's a bit of a workout because my kids like to go fast and it only runs on peddle power.  Nicholas and I paddled with the two sets of peddles while Rachel had it easy just riding along between us. 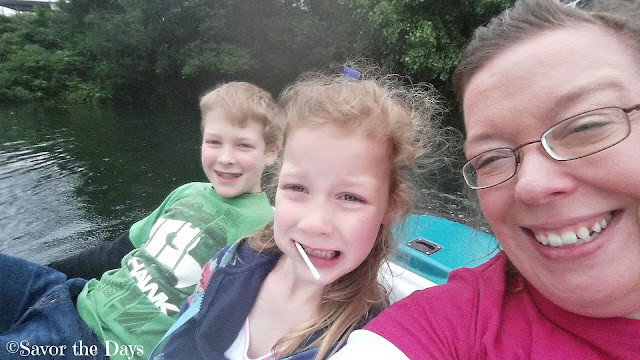 They came up with imaginary stories about us being superheroes trying to catch bad guys as we zipped around the little pond.  I love hearing their creativity come to life! 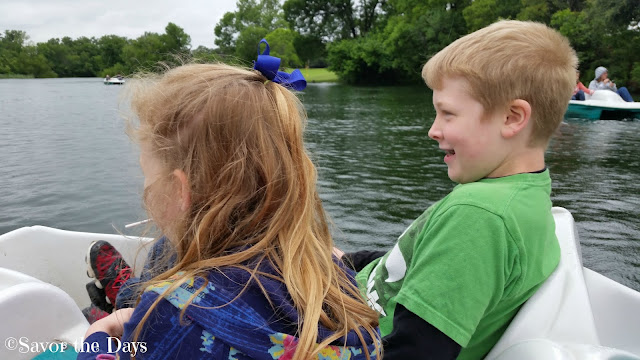 It was a very overcast day so I packed some disposable rain ponchos for us, just in case.  Well two drops of water fell from the sky and Rachel just couldn't wait to put her poncho on.  Silly girl! 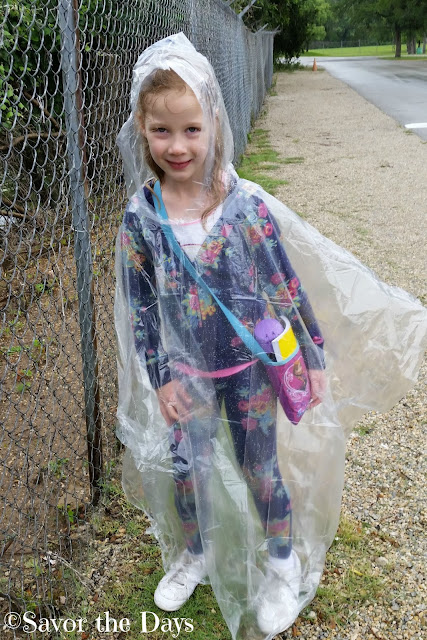 She rode the pony around the track for a while but she seemed a little scared of it.  I'm not sure why because she has ridden ponies like this many times in the past.  Nicholas didn't like seeing the ponies tied up and being forced to walk around in a tight circle all day. 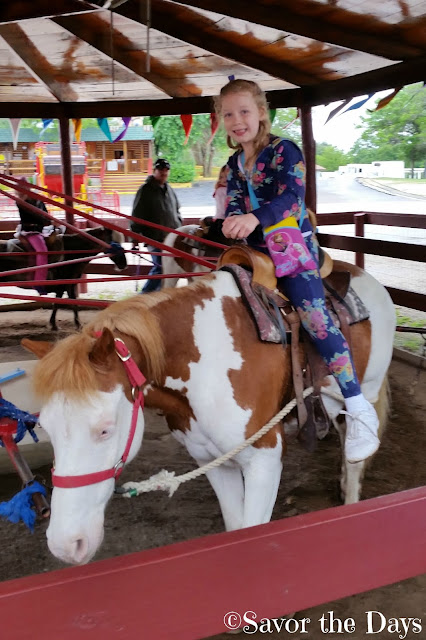 We took the train ride around the park before heading home.  It was another fun visit to Sandy Lake Amusement Park! 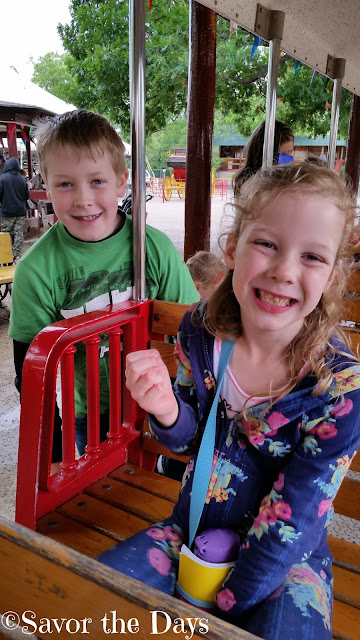 at May 21, 2015
Email ThisBlogThis!Share to TwitterShare to FacebookShare to Pinterest
Labels: field trip, Nicholas, Rachel