We made a trip down to Galveston to drop Nicholas off at Texas A&M Sea Camp for a week long camp in Adventures of Marine Biology.  But since we were going on Father's Day we decided to find a nice local seafood restaurant to celebrate how awesome Stuart is. 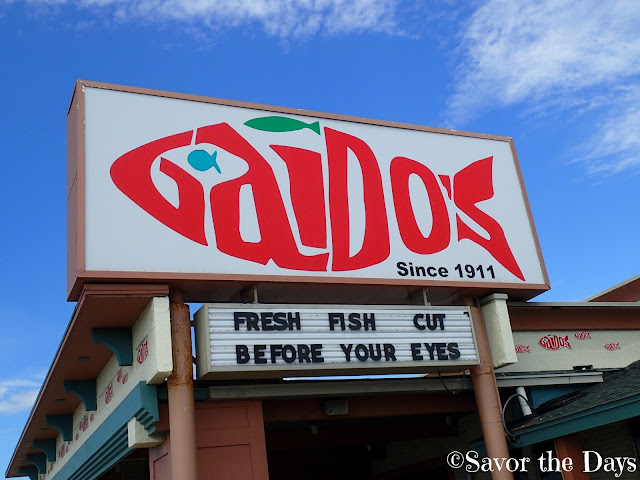 The giant crab on their roof is striking and certainly gets your attention.  Rachel loves to eat crab and she thought it would be great to eat such a giant crab! 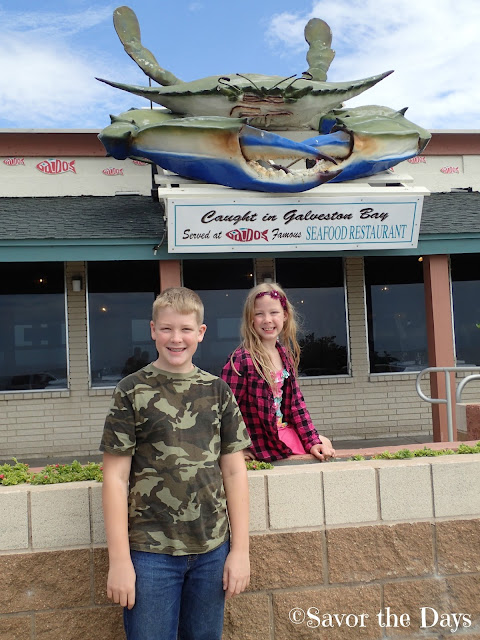 We got there for 11:00 just as they were opening so it was nice and quiet.  The dining room is nice and there are lots of windows for great views of the beach. 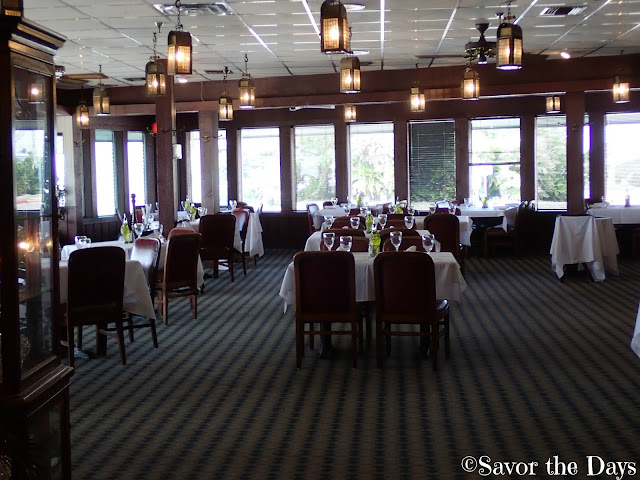 Rachel thought it was all so fancy.  We don't usually eat at restaurants with such nice glasses, tablecloths, etc. 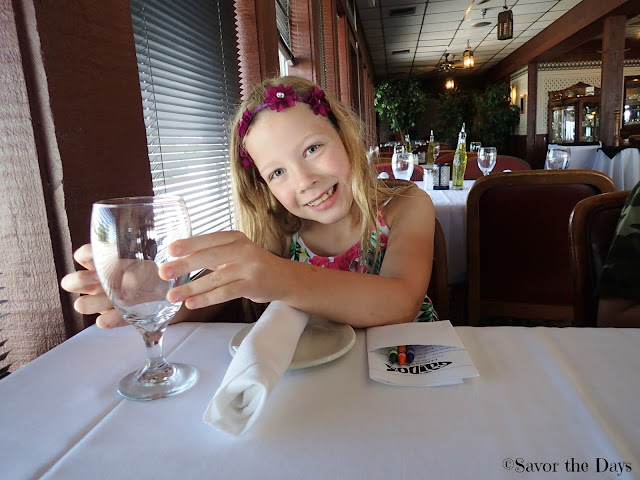 Their homemade bread and dipping oil was delicious.  I may have eaten more than my share. 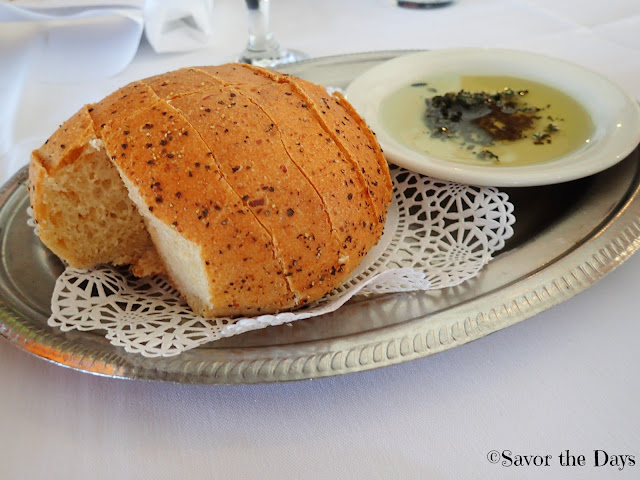 We ordered two appetizers so the kids could experience a few new foods.  Rachel loved the calamari. 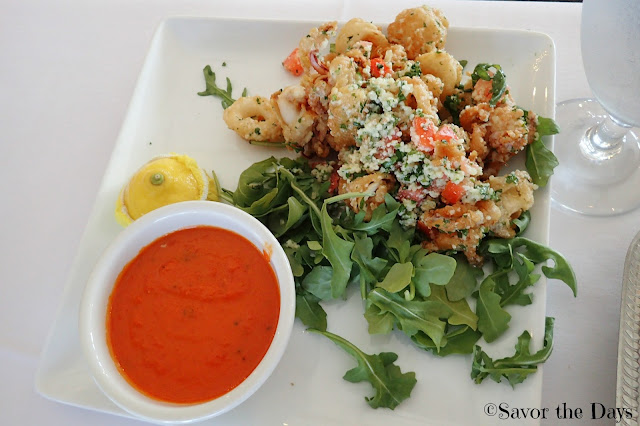 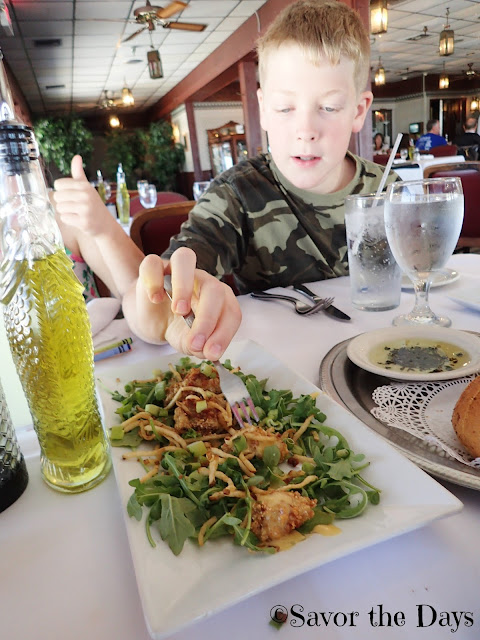 I'm so proud of my kiddos for trying such unusual foods! 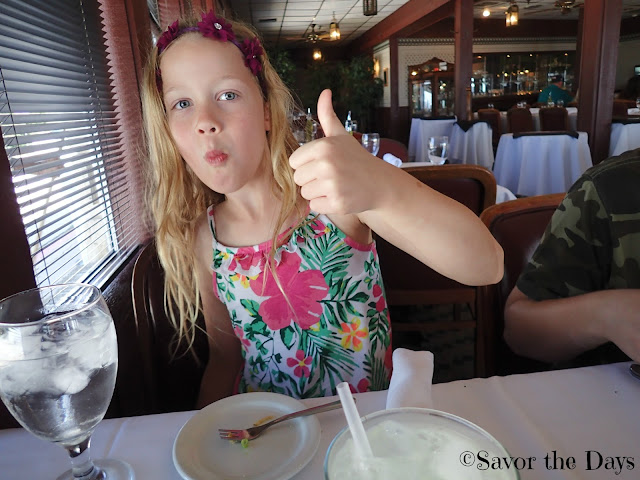 For his meal, Nicholas ordered the seafood platter.  I believe it was a bit more food than he was expecting. 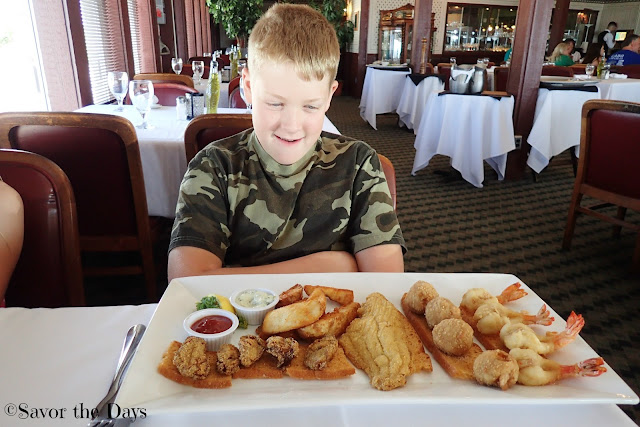 I ordered the Combination Platter which came with char-grilled shrimp, scallops, and fish.  It was so delicious! 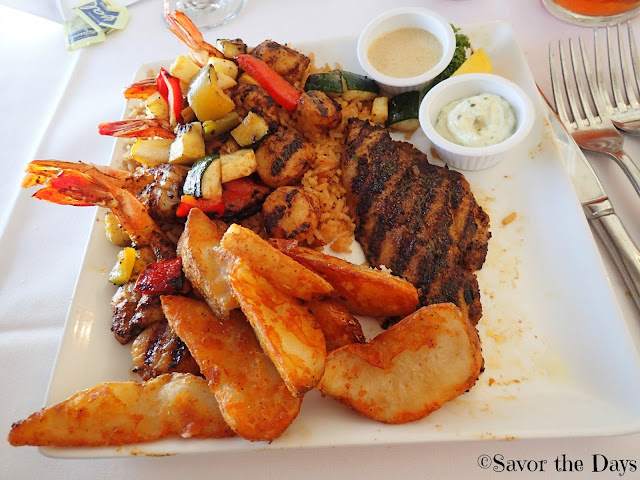 Rachel ordered shrimp.  She took one bite and said she loved it! 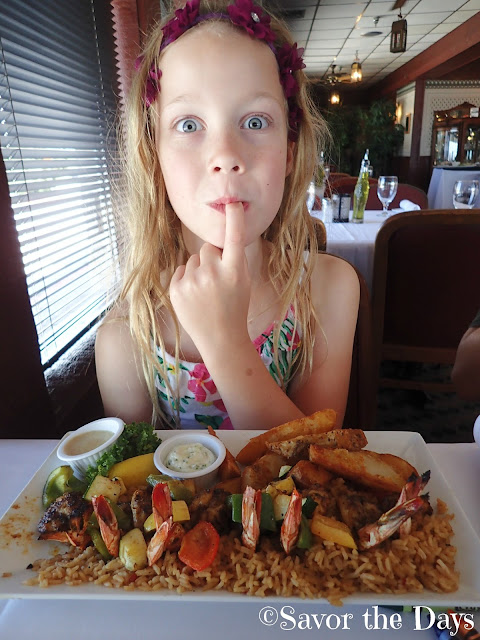 After lunch we had a little bit of time to just explore before we had to drop Nicholas off so we walked across the street to the beach.  It's kind of unusual for me to see a beach right next to such a busy road.  There is a wall between the two and stairs going down from the street to the beach.  Nicholas sat here to take off his shoes so he could play at the water's edge.  We hadn't really planned on coming to the beach today!  I couldn't help but take this picture.  He's just looks so grown up! 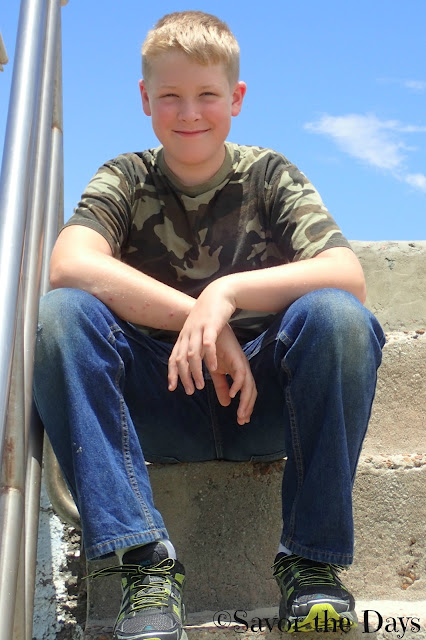 The beach was nice and in the distance we could see Pleasure Pier which is a pier that has restaurants, shops, and an amusement park! 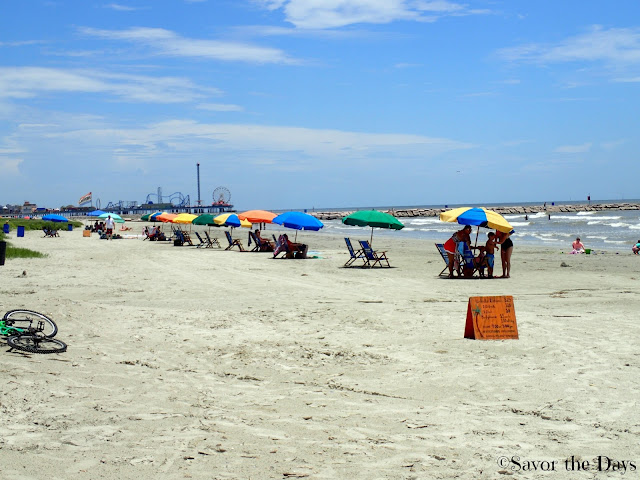 Shell collecting soon began. There were plenty of them scattered around. 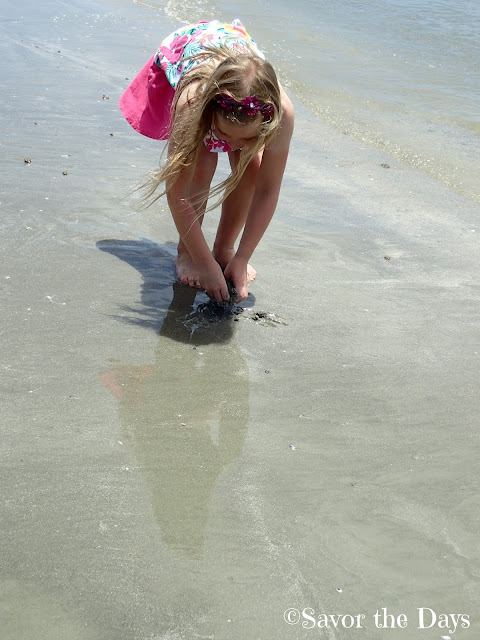 The kids had fun and got a little sandy and wet despite Daddy's pleas to stay clean because we didn't have a change of clothes or even towels for them. 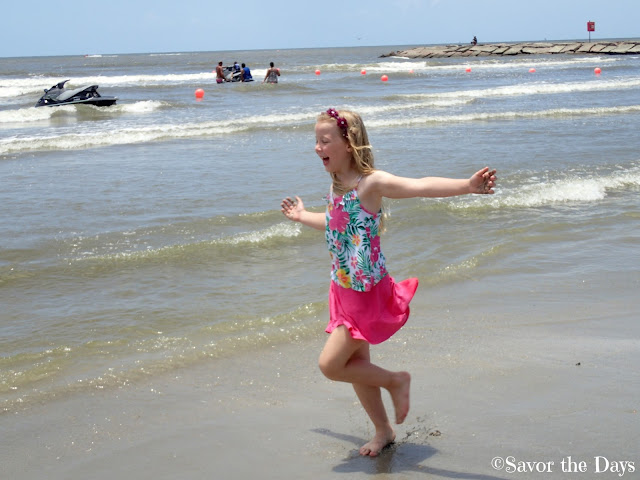 We drove along the coast for a while for some sightseeing.  When it was time to turn around, Stuart made a u-turn at this spot and ended up going up the embankment just a little.  The kids were so delighted about being at an angle that Stuart drove on the embankment for a little way.  There were such squeals of laughter from the back seat!  It was a highlight of the day. 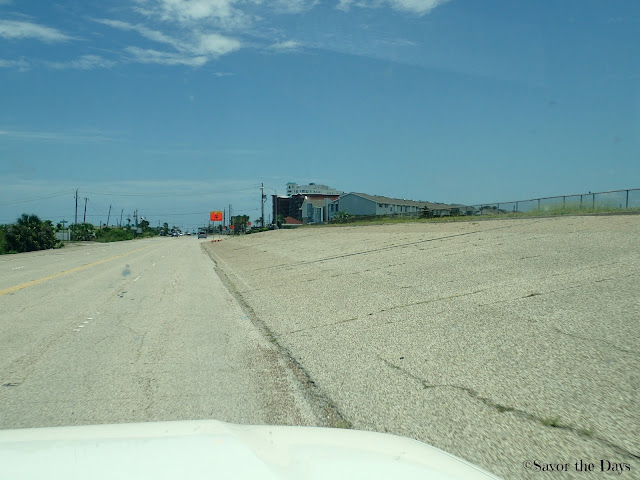 We picked up some snacks at a local grocery store so Nicholas could have a few things in his room during the week.  Then we headed to the camp.

It was hard seeing the real Texas A&M signs.  It was really hitting me that we were dropping him off at a college campus for a week!  What was I thinking?!  He's still my little guy. 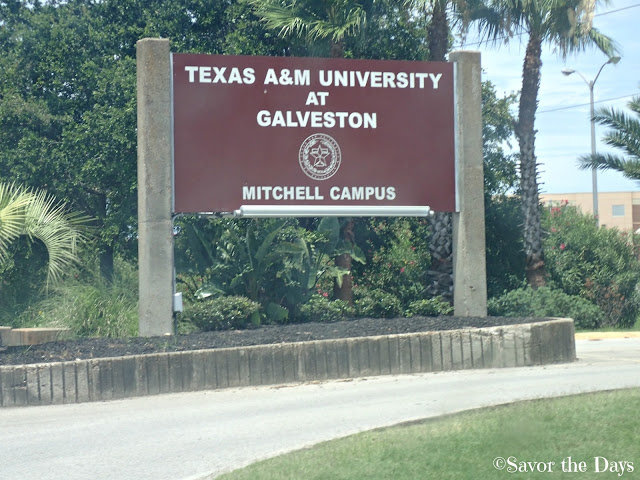 Sea Camp is going to be a pretty amazing experience for Nicholas though.  They offer many different kinds of camps throughout the summer. Nicholas is taking the Adventures in Marine Biology.  They will explore a salt marsh by seining, digging, and sieving; learn about biota and food chains; dissect a fish and learn about fish printing; collect live oysters and study them with an oyster biologist;  trawl for shrimp, fish, and crabs from the research vessel Earl L. Milan; tour a turtle facility and meet the threatened Loggerhead sea turtle; and attend a workshop on whales and dolphins and examine real dolphin bones.  It sounds so great and I'm actually jealous that I can't go to camp myself! 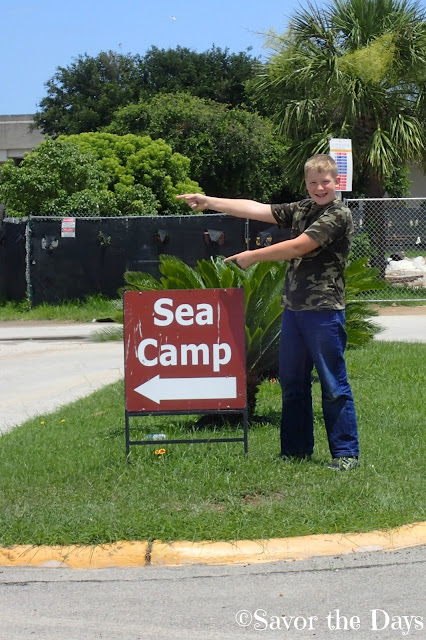 Here we are at Check-In!  Ahhh, this is really happening! 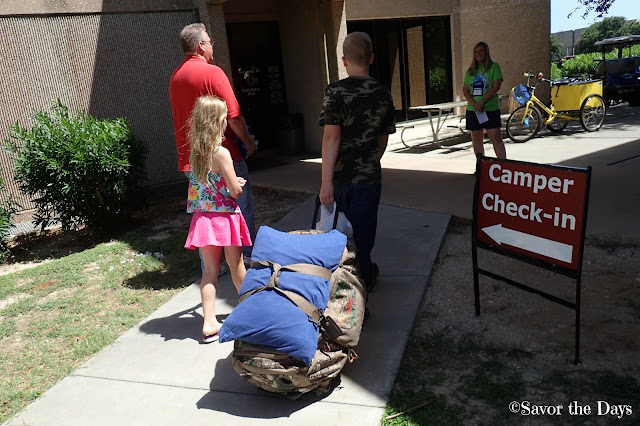 Nicholas checked himself in.  He got his room assignment as well as his badge and lanyard that he will wear all week. 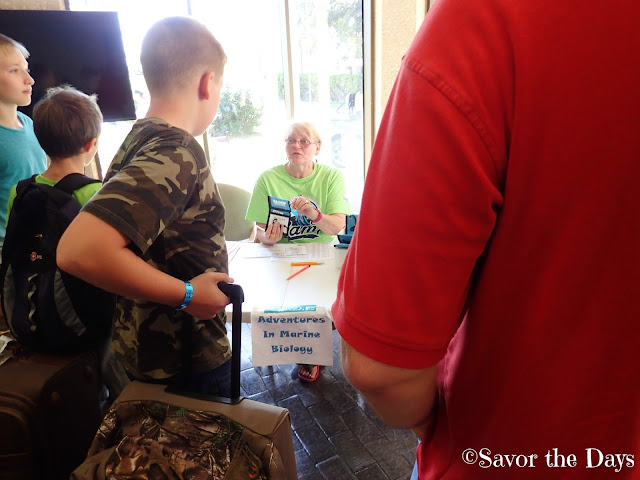 He will be staying in Oceans Hall.  I can't help but notice the knot in my stomach as I look at the sign and realize again that he will be staying in a college dorm for a week!  It will only house Sea Campers this week and it will be a neat experience for him.  I'm just having a hard time coming to grips with the fact that he is old enough to do something so cool without Stuart or I being with him. 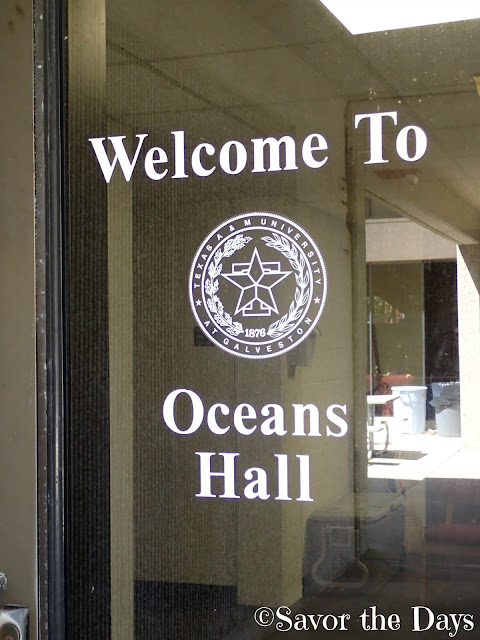 The dorm is classic with a long hallway and lots of rooms on either side. He will have one room mate, Carter.  They will share a bathroom with the two boys in the room beside them. 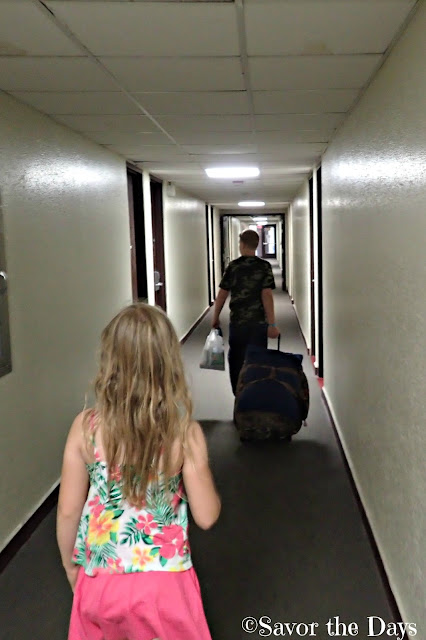 Nicholas' room is on the second floor and they have a nice little balcony in their room. 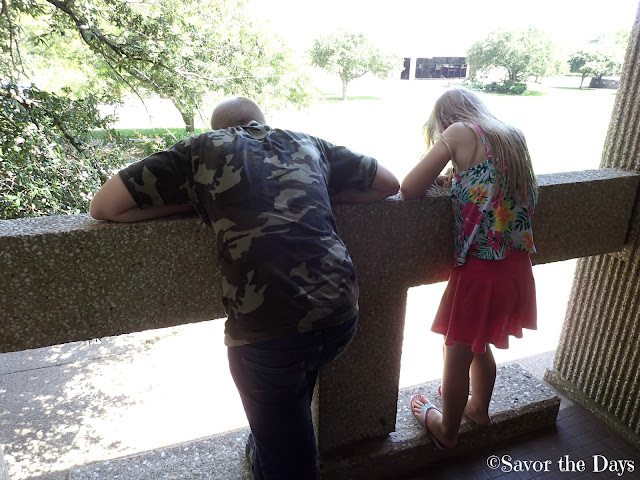 This is his room for the week. 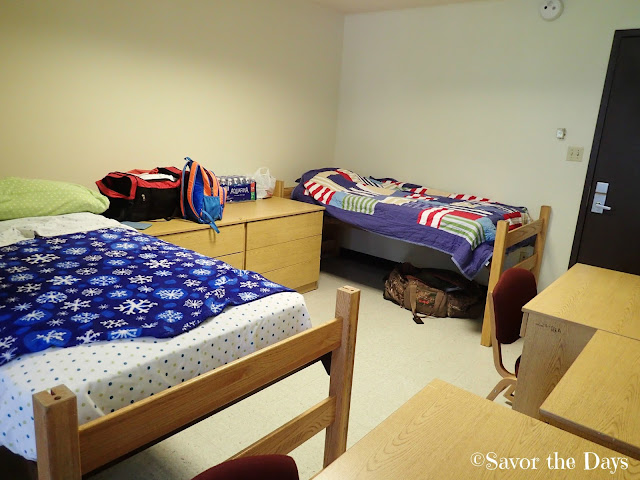 Seriously, when did he get so grown up? 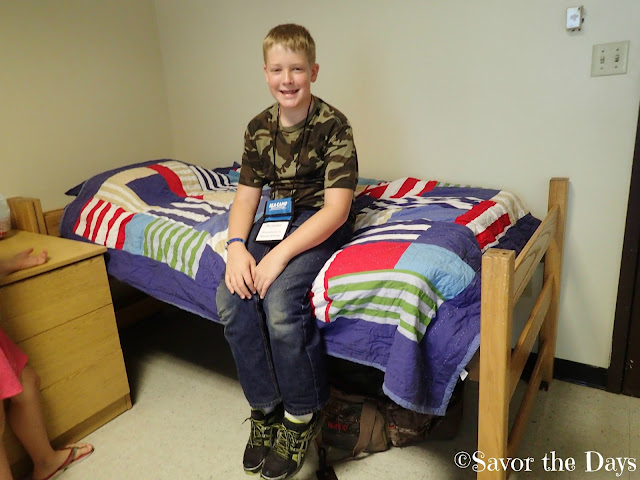 It was time to say goodbye and Nicholas walked us back out to the car.  Rachel was crying because she was already missing him.  Nicholas gave her lots of hugs. 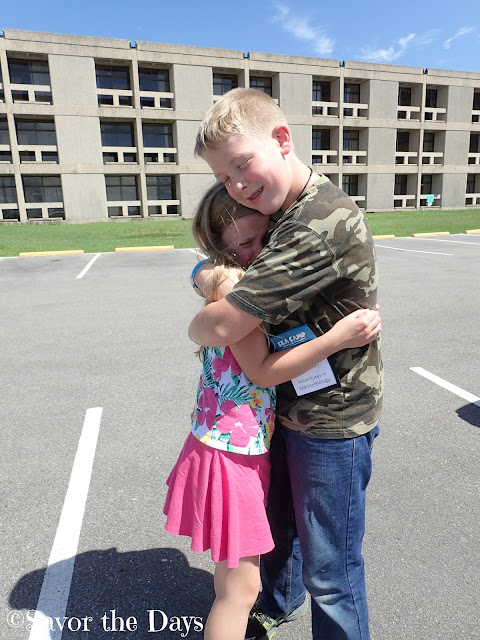 What a contrast in this picture below!  Sad sister crying.  Big brother with a giddy grin and looking back to check out the other campers arriving.  He couldn't wait to go meet his new friends and jump into the fun activities. 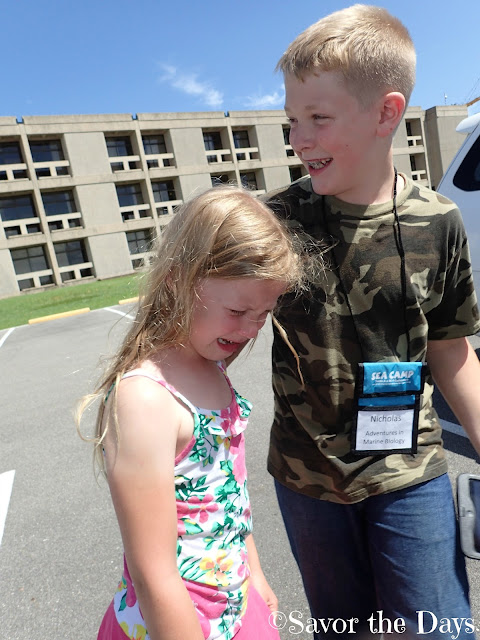 Sea Camp will take pictures of the kids during the week and post them on a website so we'll be able to see what Nicholas is doing each day.  We also got him a cell phone so he can keep in touch with us by phone, text, and email.  It will still be a hard week for us all with him gone.
at June 19, 2016
Email ThisBlogThis!Share to TwitterShare to FacebookShare to Pinterest
Labels: family, field trip, food, growing up, milestone, Nicholas, Rachel, vacation